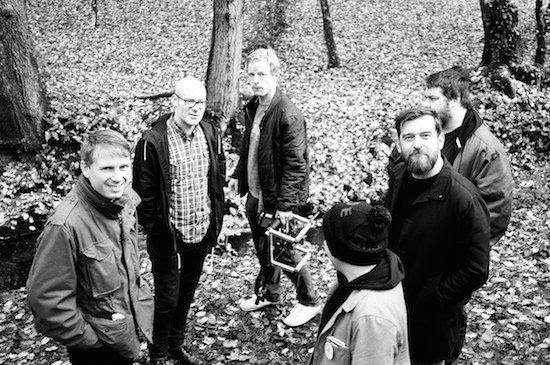 Some time ago, unknown to each other, two men with respectable white collar jobs went to a concert by Luke Haines. Both of them enjoyed the concert but one of them decided to jack in his job and become a documentary filmmaker who would start his career with a film about Luke Haines. That man was not me; rather it was Niall McCann and his Luke Haines film was called Art Will Save The World. More recently he made a another music-themed film, called Lost in France, which is about the Glasgow record label Chemikal Underground and acts that have appeared on it (Mogwai, Arab Strap, The Delgados, etc.). The film kind of takes its title from the time a load of Chemikal Underground acts played a small music festival in Mauron, France back in the 1990s and then brings some of these artists back to play gigs in the same place again. Several of the artists and label organisers (overlapping categories) say in the film that the French music festival was not a particularly seminal experience in the label's life but the device still works as frame on which to hang things.

For all my interest in the music of Glasgow, my focus has been more on Belle & Sebastian, their friends and relations and older acts like Teenage Fanclub, the Vaselines, and the Jesus and Mary Chain etc., who might be seen by some as more "indie" than the Chemikal Underground acts. I do not know The Delgados at all, I know Arab Strap almost as a caricature (the joke among some of our friends was that they were basically a band fronted by the Ewan Bremner character from Mike Leigh's Naked) but I have at least seen Mogwai a few times at All Tomorrow's Parties even if I have never fully surrendered to them. The film therefore was an interesting window into a mysterious and half-glimpsed world.

The film also works as a meditation on the nature of the music industry generally. There are the usual discussions of why some artists become successful and others less so. The film features Alex Kapranos of Franz Ferdinand, who apparently had some links to Chemikal Underground in days of yore, and he himself notes how the fates made his band successful while others failed to attract a wide popular audience (though he does say "I mean, I'm not saying 'why were we successful?', because I know why we were successful: we wrote a lot of catchy songs that people liked"; it would be a strange universe if the popularities of Arab Strap and Franz Ferdinand were reversed). The more general point is made that Chemikal Underground started at a time when people still bought records rather than streaming or downloading music for free. Stewart Henderson of The Delgados and Chemikal Underground itself notes that in days of yore the income from record sales meant that the label was able to support small-scale bands playing gigs in relatively out of the way places in the USA (in expectation of further record sales); that will not be happening any more. So the film ends up being a bit elegiac for a now vanished era, with an accompanying sense that perhaps music is something that is coming to an end.

That said it is not a mopey film. The musicians have a lot of roffles on their second trip to France and with their reminiscences about the first. One my favourite possibly unintentionally hilarious moments was when they arrive once more in Mauron and are greeted by some French bloke who was involved in organising the original festival. He shakes the men's hands and then gives a monster hug to Emma Pollock (solo artist and member of The Delgados) that perhaps over-lingers, while her husband/partner (another Delgado) stands around awkwardly.

Less appealingly this did come across as a pretty blokey scene and it would have been a total sausagefest if it had not been for Emma Pollock. She also seemed to be slightly flying the flag for the more "indie" Glasgow, with her nice coat being in striking contrast to the more non-descript outfits of the blokes.

Anyway, as mentioned above, this whole scene is one I am relatively unfamiliar with and after seeing the film I was struck by the idea of purchasing a representative record by each of the key acts referenced in it. So to what extent can readers recommend to me albums by the following artists: Mogwai, The Delgados, RM Hubbert, Emma Pollock and Arab Strap?

Readers may also be interested to hear that Niall McCann has now made another music-themed film, The Science of Ghosts, which deals with the musician Adrian Crowley and which will be shown at the Audi Dublin International Film Festival on 26 February 2018.