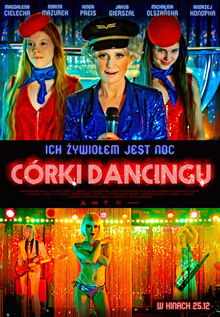 I saw Polish film in the Dublin film festival earlier this year. It deals with a nightclub band who find two siren-mermaids and then bring them back to add backing vocals to their band. The mermaids also double up as strippers (who can shape-shift into human form when away from water). It is set back in the 1990s (it took me a while to register this) and it is a musical: as well as the scenes of the band playing in the nightclub there are moments when people break into song and dance routines. It is somewhat done for laughs, though I think it would be funnier if you got all the Polish cultural references, but it has its sadface moments on the transient nature of human-mermaid love. And it goes a bit horror from time to time. So thematically and mood-wise it is a bit of a dog's dinner.

I found it a bit sleazy and exploitative. It was noticeable that the two mermaids spend most of the film topless and possess a certain jailbait quality. Yet the director is a woman so maybe this is actually a feminist film, in which the audience are being confronted with their own voyeurism.