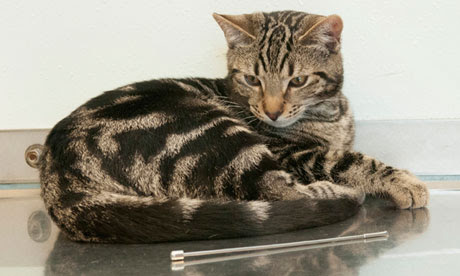 Alphie is a kitten who lives in Sheffield. His owner, Ms Vanessa Waite, reports that he likes watching the television, as he seems to find the moving images fascinating. But Alphie loved the television so much he had the bright idea of trying to eat it, starting with the aerial. Unfortunately it stuck in his stomach and he had to be operated on to remove it.

Ms Waite reports that Alphie has not learned any obvious lessons from his experience. He is still watching too much television and appears to be still trying to eat all kinds of inappropriate objects.