I went to some performance in the first Dublin Butoh Festival recently. But what is Butoh? Well, it is a form of Japanese modern dance that was invented by this guy called Kazuo Ohno in the 1950s. Butoh is characterised by very slow and deliberate movements and seems to often be performed without musical accompaniment. In my very limited exposure to the form, the dancers sometimes are made up in a very striking fashion, though this seems not to be essential. I have the vague idea that originally Butoh was some kind of response to the destruction wreaked on Japan in the Second World War, but with the passage of time it has become a bit less situated in that particular historical epoch.

I myself am something of an expert on Butoh, having once some Japanese guys called Sankai Juku performing a Butoh piece called Hibiki in the Dublin Theatre Festival in 2007, reading the programme to obtain a background understanding of the form. On that occasion there were was no musical accompaniment as such, just the sound of running water, and the dancers were indeed dressed and made up in a strange and austere manner that complemented the minimalist movements they made. Sadly there were several event people in the audience who lost interest as soon as they realised how avant-garde it all was, and after shuffling in their seats a bit they made their way to the exits. The Butoh itself was fascinating. I had never seen anything like it before and I suspected that I would probably never see its like again either.

But then I received an e-mail saying that a Butoh Festival was about to take place in Dublin, with the events taking place in the Back Loft, an exhibition space in an industrial building converted into artists' studios. I resolved to attend.

The first thing I went to was a selection of short films and one live performance under the umbrella title Dancing Senses. First up was a film called An Offering To Heaven about Yukio Nakagawa, a non-conformist flower arranger from Japan. That immediately struck me with how Japan is different from here, in that I could not imagine Irish flower-arranging having its own radical avant-garde.

The film partly presented a profile of Mr Nakagawa and partly showed up as he worked up to a big event, collaboration with Kazuo Ohno. Mr Ohno was to perform in the open air while a helicopter flew overhead 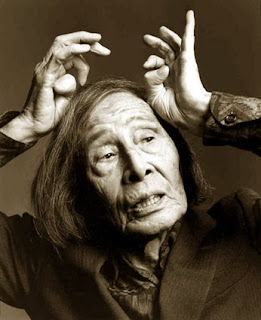 and dropped half a million flower petals down over him. While obviously such a thing largely works as a conceptual piece, it was interesting to watch the practicalities of it unfold. Where do you get that many flower petals? What happens if the weather does not play ball? And so on.

Another striking feature of the Ohno-Nakagawa collaboration was how old and infirm they both were. Nakagawa suffers from spinal problems since his childhood, but this was not too much of a problem for his artistic work. Mr Ohno, however, was 95 when the collaboration took place and was wheelchair bound. Undeterred, he just did his dancing while sitting in a chair.

That was followed by Vulnerably Raw, a dance piece by Ambra Bergamasco. For this, the audience were sat in armchairs. Ms Bergamasco came in from a door in a corner to the back left of the

room and then moved very slowly in front of us. There was no musical or other sonic accompaniment apart from the ambient sounds of the room - creaking chairs and floorboards and the click of the shutter on the camera of the official photographer. In contrast to the Butoh piece I saw in 2007, the dancer's make-up and clothing was not particularly extreme - she was wearing an attractive dress and did not have any kind of austere make-up, with the one immediately odd feature of her appearance being that she was wearing just one stocking.

With art sometimes the viewer projects meaning and context where it might not have been intended by the artist. In this case, Ms Bergamasco's entrance through a door that closed behind her, her slow movement along to the front of the audience, and the shadow projected on the wall behind her put me in mind of one thing - Nosferatu, the German expressionist horror film directed by F. W. Murnau. That the dancer looked nothing like Nosferatu (unlike a great many other Butoh performers) made this a more bizarre juxtaposition.

The overall performance was slow and intense. Some of the actions suggested a meaning outside of the pure abstraction of the dance, but nothing directly obvious sprang to my mind, though some of it did seem to lean into a somewhat sexual area. And there was some audience participation - at one point she squatted on a pile of yellow melons, basically pretending to be a chicken, and then gave out the melon-eggs to members of the audience, including me. This reminded me of how avant-garde art can often be kind of funny but in a way that requires everyone to pretend not to notice this.

At the end of her piece the dancer was sitting in a pre-arranged circle of flowers more or less directly in front of me, so close for me that she almost stopped being a whole person and became a collection of individual body parts. And then the performance was over. From Ms Bergamasco's demeanour at the end it seemed that this had been a very emotionally draining for her. For me and I think also the rest of the audience it was a demanding but intensely rewarding piece of work.