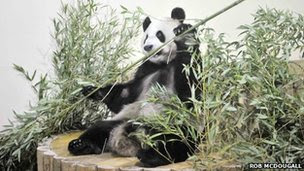 The BBC reports that penguins have been defecating on people queuing to see the pandas in Edinburgh Zoo. It appears that the penguins are not jealous of visitors going to see other animals. Rather, the curious birds have merely been climbing on the wall of their enclosure to have a look at the people waiting to see the pandas. Due to an unfortunate design fault that does not inspire confidence in the zoo's ability to adequately house its animals, when the penguins then expel their bodily waste it drops down on the would-be visitors to the pandas.

According to an unnamed visitor who saw someone in front of him struck by the penguin excrement, the guano is "oily and stank of fish" and "looked like it would be really hard to clean off".

An inuit panda production
Posted by ian at 10:53 AM