H IS FOR… HAWKWIND!

Hawkwind! As with so many things, I discovered them through my old friend and quaffing partner Mr W—, who would talk a consistently good game about them. When we were in London one summer (back in 1988 or 1989) he made going to a Hawkwind all-dayer sound like an appealing prospect, so I went with him to the Brixton Academy and saw Hawkwind supported by a load of other bands. Of the others I can only really remember Naz Nomad And The Nightmares (or something similar), who were The Damned under a different name playing 60s punk-psych stuff, and some other band who seemed to my untrained ears to be a Jimi Hendrix tribute act (or maybe I just thought that because I am RASCIST, as they had a black guitarist-vocalist).

Hawkwind themselves were amazing, their show a stunning audiovisual spectacle, the big space rock sounds combining with the stunning visual images of Elric, Stonehenge, and some kind of plant with funny leaves to great effect. I was particularly excited when Lemmy came on at the end as a special guest. To this day I do not know whether he is very tall or David Brock is very short, but the size disparity between them was astonishing.

Since then I gradually acquired Hawkwind records, probably now having more by them than by any other artist.Their recorded output is patchy. For every great album there is some shoddy compilation of badly recorded b-sides, for every great live album dozens of rough recordings of off key gigs in venues with appalling sound quality. Indeed, for such a great live band it is amazing how duff most of their live albums are.

On record their golden period ran from the early 1970s to some point in the late 1970s or early 1980s, depending on where you want to draw the line. They are perhaps unusual in that although there is one person who is indisputably the main person in Hawkwind (Dave Brock), there are an army of others who have provided services more stellar than just being the guy who plays bass. Other members of Hawkwind who would be the frontmen of any other band (and in several cases were) include saxophonist Nik Turner (fired by Dave Brock for having his own ideas), Lemmy (early bassist, fired for liking different drøgs to the rest of the band) and poet Robert Calvert. I should also mention Stacia, who enlivened their concerts with her expressive dancing, clad in little more than body paint; she is now a visual artist living somewhere in Ireland.

The big draw with Hawkwind for me was the spaciness, the sense that this was a band related to the world of Science Fiction. One hears how Michael Moorcock used to join them onstage in their early days, writing lyrics for at least one of their tunes. They had other songs referencing works of Moorcock and other SF writers, while some of Calvert's lyrics in particular have very SFnal themes. Occasionally the lyrics have utopian themes, but more usually the atmosphere is paranoid and dystopian. 'Sonic Attack' mimics a Protect and Survive type public information film, telling listeners what to do in the event of a sonic attack. 'Damnation Alley' describes a journey across a USA devastated by nuclear war. 'Spirit of the Age' has an astronaut flying away at relativistic speeds, thinking of the left-behind lover ageing rapidly while he stays the same age. Yet despite the dark future lyrics and Hawkwind's fondness for playing free festivals out in the country, they remain relentlessly technological and urban. To me they are not like hippies suggesting a retreat to some kind of pre-industrial pastoralism.

Like I said, not all Hawkwind records are good, so while they have a vast recorded output they are easy enough to approach for a novice. If you were thinking of dipping your toe in the waters of the Wind (er), try one of the following: 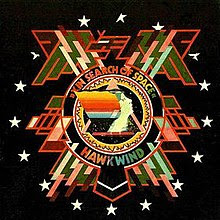 In Search of Space (1971) - featuring the stunning 'Master of the Universe'. The CD reissue also has Hawkwind's hit single 'Silver Machine', an enjoyable piece of fluff.

Doremi Fasol Latido (1972) - opening with the epic Nik Turner composition 'Brainstorm', the CD reissue also features 'Urban Guerilla', an edgy tune in the age of the RAF and Angry Brigade. 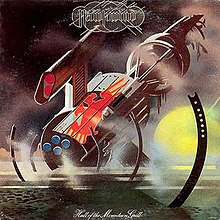 Hall of the Mountain Grill (1974) - next of the 1970s run of classic albums, possibly lacking any single track as in your face as the last two but a solid piece of work.

Warriors on the Edge of Time (1975) - more Moorcock inspired craziness. 'Assault and Battery' is a particular favourite of mine. The CD reissue features 'Motorhead' as a bonus track, recorded by Hawkwind before Lemmy took it away with him as the name for his new band.

Quark, Strangeness and Charm (1977) - probably my favourite. The opening track is a SFnal tale of love and loss set to an epic and motorik beat. It is followed by another corker, a song inspired by Roger Zelazny's Damnation Alley (and called 'Damnation Alley'). The album also features the endlessly controversial 'Hassan-i Sabbah', linking the mediaeval cult of the Assassins with the Palestinian militants who were stirring things up at the time.

Levitation (1980) - arguably the last great Hawkwind album. Features Ginger Baker on drums, though not so you would notice. 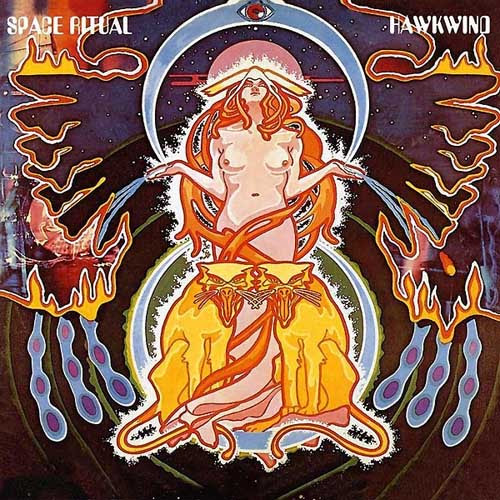 Possibly the best place to start would be with Space Ritual, a live album released in 1973. It captures this great live band at the peak of their powers and features great versions of many of their best songs (including several that never made it onto any of the albums, like 'Orgone Accumulator').

Hawkwind still play live. They are older and more grizzled now and many members of yore have fallen by the wayside. I fear they have completely gone off the boil on record, but their live shows continue to fascinate.

There is also a fascinating BBC documentary about the band, currently available to view on YouTube: