Beavers used to live wild in England, but they were exterminated in the 16th century. In more recent years, some have been reintroduced into the wild in Scotland, but there have been no organised reintroduction programmes in England and Wales. However, there now appears to be a wild beaver community in Devon. 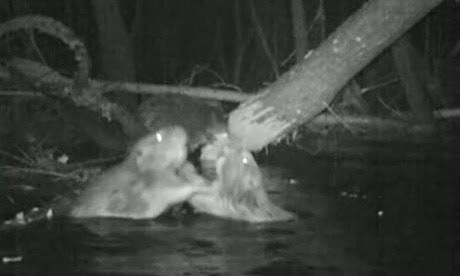 After reports of sightings and signs of gnawed trees, retired environmental scientist Tom Buckley set up motion sensor cameras along the River Otter in east Devon. The cameras captured an image of two beavers playing together while a third gnaws at a tree in the background. The image is fascinating, suggesting that now there might be a breeding community of beavers living wild in England.

Quite where the beavers came from is something of a mystery. There are beavers living in a securely fenced compound run by the Devon Wildlife Trust, but they have all been accounted for and have not busted loose to set up home along the River Otter. The wild beavers may have escaped from some other site where they were being held in captivity. Or perhaps some mysterious person or group set them free deliberately. In England it is currently an offence to set beavers free, but there have been calls for their wider reintroduction as a way of combatting floods.

Scientists have called for the River Otter beavers to be left alone and carefully monitored to see how their colony develops. The Department for Environment, Food and Rural Affairs (DEFRA) said however that it was looking into the case and deciding what action would be taken; the DEFRA spokeswoman declined to comment on whether the beavers would end up being left alone, moved or killed.