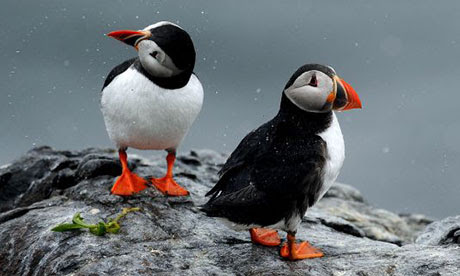 Puffins always look a bit sad and in recent years the Puffins of the Farne Islands have had plenty to be sad about - Puffin censuses had shown an alarming decline in their numbers, from 55,000 breeding pairs in 2003 to just 37,000 in 2008. But the latest census shows that the little fellows have now increased their numbers back to 40,000 pairs, despite difficult conditions last winter.

David Steel, head ranger of Farne Islands, suggests that the secure breeding habitat his team have secured, together with a plentiful supply of food in the area, have done much to help the Puffins. A look at the map, however, draws attention to the islands' proximity to the small town of Seahouses. In the last few years, this is where singing weekends have been hosted in winter months by popular folk group the Unthanks. Can it be just coincidence that Puffin numbers have increased in years that have seen people gathering on the beaches across from their islands to sing sea shanties in three part harmonies? 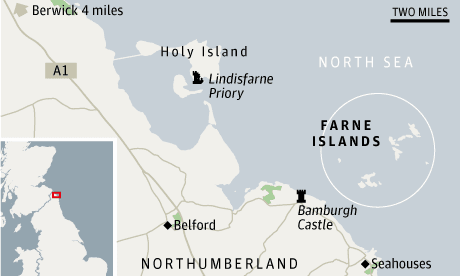 A frank account of the various occurrences at an Unthanks Singing Weekend: part 1, part 2.

Email ThisBlogThis!Share to TwitterShare to FacebookShare to Pinterest
Labels: animals, Puffins, The Unthanks

Hi ho, puffins on a raft.